A group of nine works including a key work by Karl Weschke. Although associated with the St Ives School through geographical proximity and his friendships with Bryan Wynter, Roger Hilton and W.S. Graham, his mature work, which focused on landscape, the female form and animal figures, owed more to German Expressionism than the landscape-inspired abstraction of the St Ives Moderns. His paintings of the 1960s are powerful and dramatic, using a restricted palette of browns, ochres and blacks to impressive, almost awesome, effect. The large painting Sturmfl, included in this selection, was exhibited at his Tate St Ives retrospective in 2004 and is a quintessential example of the artist's work of the period. As well as the Weschke painting, the group includes works by Sandra Blow, Barbara Hepworth, Ben Nicholson, Kate Nicholson, Simon Nicholson, Victor Pasmore, Brian Rice and Robyn Denny. 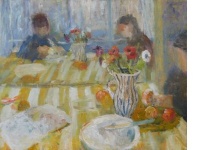 Details of our forthcoming exhibitions

Selected past exhibitions are archived here for your reference.