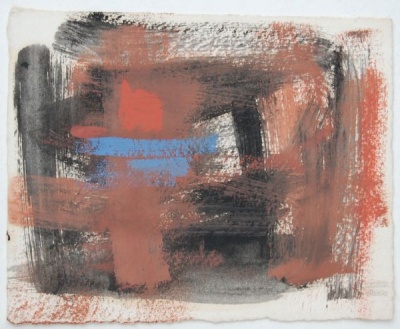 John Wells studied medicine at University College Hospital University and qualified as a doctor in 1930. In 1927, whilst studying art at evening classes, he exhibited in the Daily Express Young Artists Exhibition at the Royal Society of British Artists. This was followed in 1928 by a visit to Cornwall, where he was introduced to Ben and Winifred Nicholson and Christopher Wood whilst studying for a short time with Stanhope Forbes. He had visited Cornwall as a child. His mother was Cornish and her family home was based in St. Meryon.

After working in various hospitals in the early 1930s, he took up the post of General Practitioner for the Scilly Isles in 1936. During the war he visited St. Ives where he also met Naum Gabo as well as re-visiting Nicholson and Hepworth. Gabo left a life-long impression upon him. In 1945 he bought one of Forbes' old studios in Newlyn and changed his career to become a full-time artist. His work became based on geometric abstraction and relief construction.

During the late 1940s, he exhibited in London, St. Ives and Paris and throughout the 1950s he was included in exhibitions at the Durlacher Gallery, New York as well as mixed exhibitions abroad and in Britain. The Waddington Galleries in London gave him his first solo exhibition in 1960. His work is held in a number of collections, including the Tate Gallery, The Victoria and Albert Museum, Gothenburg Museum and Piers Art Centre.